An Afternoon in NYC

I work in NYC so I don't like to spend too many weekends there. However, since NYC is a cultural mecca and I can't do everything after work (especially when I work so many long hours!) sometimes I have to break down and venture into the city on the weekends. My friend, Lisa and I ventured in together today. Lisa works as many hours as I do so I usually have to schedule events weeks and sometimes months in advance with her! This is one of those things that we scheduled back at the beginning of May.
We specifically went in to see the Poiret: King of Fashion exhibit at The Metropolitian Museum of Art. I wanted to see this exhibit because I love Coco Chanel's work and she was heavily influenced by Poiret. He was the first designer to design "corsetless" womenswear. Most of his designs are deconstructed and simply draped to create effortless dressing for women in the early 1900s.
There was this quote on one of the first walls when you enter the exhibit and in the book that you can purchase that accompanies the exhibit, "Am I a fool when I dream of putting art into my dresses, a fool when I say dressmaking is an art?...For I have always loved painters, and felt on an equal footing with them. It seems to me that we practice the same craft..." This really spoke to me. Because I truly believe that we dressmakers are artists and to realize that one of the architects of modern dress for women also felt that way, validates my viewpoint.
The exhibit is small but has some interesting features. There are two videos that show how he created a coat and a dress and then after the video finishes the actual garment is revealed. Lisa was mesmerized by these videos and watched them several times through because the construction was very simple but the end results are beautiful due to the colors he used, the fabrics and how the fabrics draped.
Many of the garments in the exhibit could be worn now. The empire waists that have been shown this season, the looser fitted dress and the detailing at the neckline are all prominently portrayed in Poiret's work. And at the end of the exhibit the last few dresses shown definitely are a precursor to Chanel's work.
Here are a couple of outfits that I liked from the exhibit:

And the detailing on this dress was really stunning:

If you have the chance to come into the city before August 5th, when the exhibit ends, it is an interesting exhibit. It is not as powerful as the Ralph Rucci exhibit was but it is an engaging exhibit and if you love Chanel it highlights what influenced her.

Of course a day in NYC is not complete without a trip to the garment district because like me, Lisa sews. She doesn't sew as much as I do and lately handbags and totes have been her sewing of choice. BTW, she was carrying an amazing tote that she had made with leather handles and the kewlest pockets both inside and outside the tote and she has promised to make a duplicate for me!

Lisa was looking for linen and she is as much a fan of Ebads Fabrics as I am ~ well I guess so since we've been shopping there for over 7 years! *smile* So we head downtown in a cab from the Met and end up hopping out at 37th & Broadway - traffic was a b*t&h! We stopped briefly at Spandex World where Lisa picked up three yards of a blue/brown paisley stretch. And then again at Pacific Trimming on West 38th Street where Lisa bought upholstery zippers. She also sews home dec.

But the real damage was done at Ebads. Lisa wasn't kidding when she said she wanted some linen ~ 25 yards later and another 15 yards of coordinating eyelet plus a length of silk charmeuse and lining fabric...the girl had bags that were almost too heavy to cart back to Grand Central Station! *LOL*

I, however, only purchased two pieces of fabric 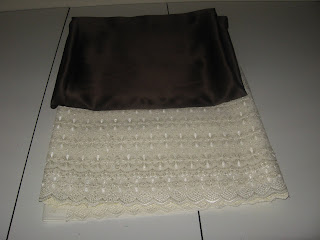 an ivory eyelet and a brown silk charmeuse 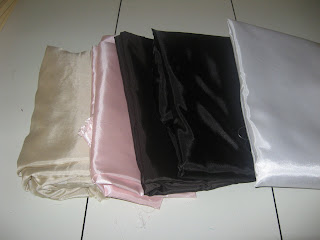 along with a whole lotta lining fabric.

Then we stopped at Daytona Trimmings...I have an idea for the ivory eyelet...and I bought some trimmings and another roll of black rayon seam binding. By now Lisa was more than ready to head back to GCS - linen is heavy to carry - so she caught a cab at the Port Authority and I headed inside for the bus ride home. 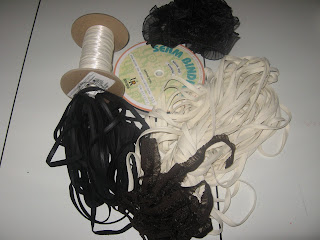 I just want to leave you with a pic of the books I picked up at the museum. The Poiret book from the exhibit, Chanel - The Metropolitian Museum of Art (the book that accompanied that exhibit) and Fashion from the 18th to the 20th Century - The Kyoto Costume Institute. 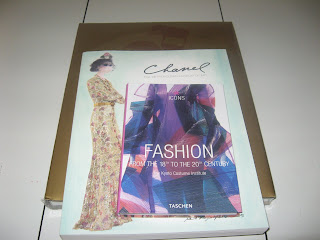 As MasterCard would say, the afternoon was "priceless!"
Posted by Carolyn (Diary of a Sewing Fanatic) at 5:34 PM