I am pretty much the Queen of TNT Patterns. I work my TNT patterns so hard that I bet some of you think I never sew from new patterns...well that is just not the case! Sometimes fashion changes just enough that if I want to be "in" I have to set the TNT aside and work on something new.

So I present to you my version of Butterick 5179: 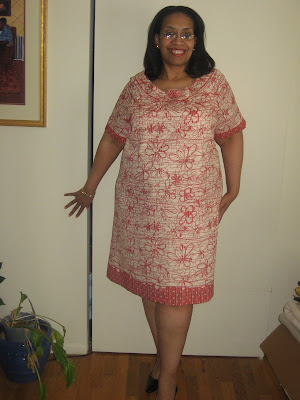 This is one of Butterick's new spring/summer releases. I purchased this pattern because last summer I saw a woman walking down 57th Street wearing a sleeveless version of this dress. I wanted that dress bad! Even though several of the pattern companies offered this dress in a sleeveless version, the Butterick pattern caught my eye because it had a short sleeve, which I thought would work better for me.
Some stats
Fabric:
A crinkled lightweight, border print linen purchased from Textile Studio.
Lining - white 100% cotton batiste from Metro Textiles.
Notions:
22" beige zipper, fusi-knit interfacing, rayon seam tape
Pattern alterations
*Body of the dress
~Added 3" to the length of the dress - Tres Bon Babble (Bonnie) made this dress and noted that the dress was a little short. So I added extra length to the pattern, thinking that I could always cut it off later if the dress proved to be too long. 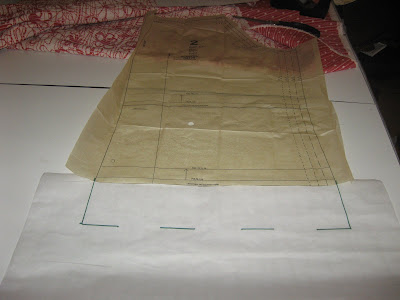 ~I used the pivot and slide method on the front piece to add approximately 3" to the waist and hip area of the dress.
~Added an additional 5/8" to the back seam tapering from the waistline down to the hemline. Even though the pattern states the finished width at the lower edge of the size 22 dress is 57.5 inches wide, I knew that I wanted the body of the dress to be at least 60 inches around to give it a more flowy feel.
*Sleeve
~After I flat measured the pattern, I decided to add one inch to the width of the sleeve.
~I added an additional 1.5 inches to the bottom of the sleeve. For me, the sleeves were just a little too short and would not be flattering to my bodacious arms. 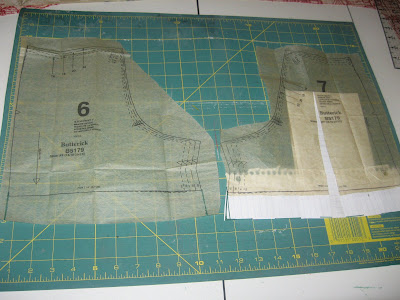 ~I also added a 3 inch band to the sleeve - again to give the sleeve more length but also to bring part of the border print up higher in the dress. This border was attached to the hem of the sleeve, then folded in half. Finally I stitched it flat. 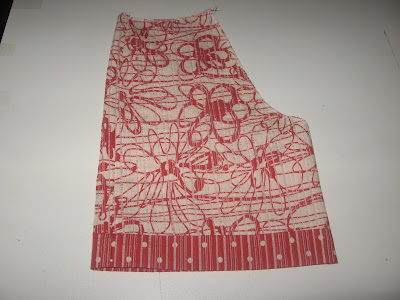 Construction:
I have to admit that I don't read pattern instructions anymore. Probably because I am usually making the same thing over and over again. This time, however, I had to follow the instructions pretty closely since it was the first time I was using this pattern.
The most important thing to note, is that I used a border print for this dress. So the pieces were laid on the cross grain of the fabric. This allowed me to use the border most advantageously. When I originally thought about making this dress, I wanted the yoke to be made from the border also, but I didn't have enough fabric left over to execute that idea. And I think not having enough fabric to cut the yoke from the border print made the dress look plainer than I wanted it to. 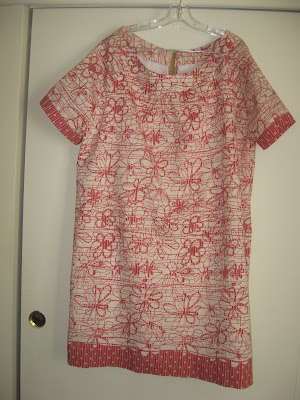 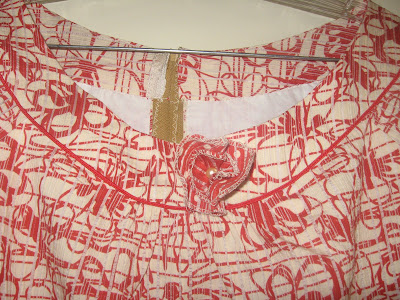 I am sure you're wondering what that little brown piece is on the back neckline. Have you ever had a facing piece come up just a smidgeon short? Yeah, me too. So this was my solution ~ to add a piece of the rayon seam binding to the end...most of the time no one will ever know ~ unless of course you are sharing photos on the internet! *smile* Now this shouldn't have happened because the interfacing was block fused to the fabric prior to cutting out the facing pieces but things happen and I had to "Make it Work!"

I cut out a lining for the front and back pieces only from the cotton batiste. The fashion fabric while pretty was lightweight and a tad sheer so to give the dress a little oomph for early cooler spring days and to prevent everyone from seeing through the dress, (not a pretty sight let me assure you! LOL!!!) I lined it. I didn't think it was necessary to line the sleeves, however, and the lining is attached to the dress at the yoke line and at the armholes.
After inserting the lining, I sewed the yoke to the dress. I arranged the gatherings on the dress front and back and then pinned the yoke piece to the dress, as the pattern dictates. Next I basted the yoke and dress pieces together. Finally I took the entire piece to the sewing machine where I placed the gathered side down on the sewing machine and sewed the pieces together. A good press caused the gathers to lay very flat. 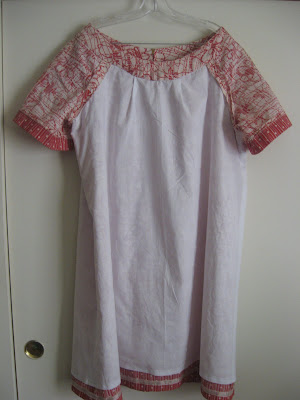 This is the point where you put the zipper in. I have to admit that I prefer to put a zipper into flat pieces rather than an almost finished dress. Because of this I chose to put the zipper in by hand so that I could better control its application.
Finally I hemmed the lining and then after adding rayon hem tape to the bottom of the dress, I hemmed it. Another good pressing and it was done.
This is the first pattern I've made from scratch in awhile so it took me a little longer than usual to complete. Also, I had to go back and add some embellishments to take away from the "housedress" look that the dress had when I originally finished it.
I have to say that the finished dress is only okay in my book. It is not fantastic. It is not "Wow!" It is just okay. But that's fine because it's the first time that I used the pattern and I'm still getting acquainted with it. I will make the dress again using a different type of fabric, something a little bolder and making sure that the hem and yoke are sewn from contrasting fabrics to give some definition to the dress. I may even experiment with a three quarter sleeve...
Will I wear the dress...sure. It kind of grows on you! And my photographer, DD #3 did say that it looked way better on with make-up and shoes than it did on the hanger. This particular version of the dress will not be a star in my wardrobe, but it's a good starting point and a reason to make other versions to explore the pattern's possibilities.
Now to my questions for today...Has this ever happened to you? Have you had high hopes for a pattern and fabric combination and it just wasn't what you expected when you finished it? Did you knock the pattern? Did you question your abilities? Or did you realize that on any given day, what you see in your mind and what comes out of your sewing machine might not match up? Talk back to me!
More pictures of the construction process can be found in my Flickr album. I am off to work on a TNT cardigan! *LOL*
Posted by Carolyn (Diary of a Sewing Fanatic) at 11:21 PM