An Interpretation of "The Dior Dress" 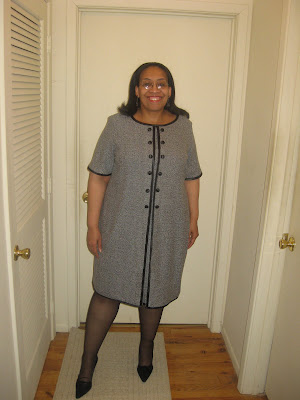 Some stats:
Fabric:
2.5 yards of a midweight poly blend tweedy fabric from Timmel Fabrics
(This is one of the few pieces that I have left from this amazing fabric resource - that I miss so much!) 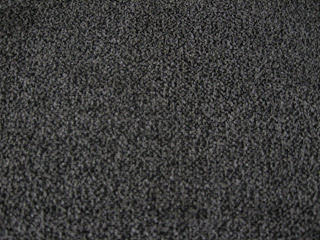 Pattern:
TNT dress pattern
Notions:
22" black zipper
black rayon seam tape
12 ~ 5/8" covered buttons
1/2" shoulder pads
yards and yards of black satin bias tape
(I bought 25 yards of it from Daytona Trimmings when I started the dress and the clerk graciously rolled it onto a spindle for me...so I have no idea how much is left! But there is plenty for future projects.)
Backstory:

I have wanted to make an interpretation of this dress since I first saw it last summer. But as with all things, I want to sew more things than I actually have time for and this had to wait it's turn in the rotation. The dress is from Christian Dior's Fall '08 Collection. While it has been pictured in a number of upscale magazines and notably the Roosevelt Mall catalog (thanks LindseyT for sharing it with me!), I think the parts of the dress that intrigued me were the binding and the buttons.
So those are the elements that I primarily feature in my version of the dress. I planned on using a version of the black/white plaid fabric that the original is constructed from, but the piece in my fabric collection was too small. It's a skirt sized length and when looking around the closet for an alternative, my eye fell upon the Timmel piece. I thought it'd be okay because it would capture the essence of the black/white feel without duplicating it.
Construction:
To me the most distinctive part of the dress, besides all of that binding and the matching buttons, is the pleat in the front. And, that's what made this dress a shoo-in for me to make...see since the Gray Flannel Dress and the Menswear Lace Dress have an inverted pleat on the front...I knew that I already had an altered pattern to use to make another version of the dress.
The actual pleat was made by laying the dress front pattern piece 3 inches from the center front seam. I measured it in several places from the top to the bottom of the pattern - insuring that it was a true 3 inches all the way down. Then I made 2 slight notches to the top and bottom of the pleat. I used those cut notches as guides to folding the 2 front pieces together. I pinned the pleats flat and then ironed them down. 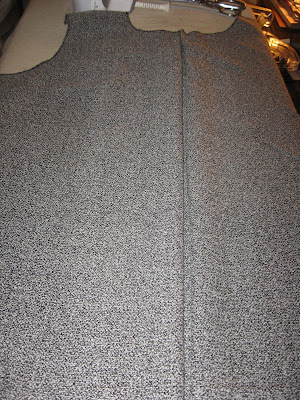 A regular zipper was used for the back of the dress. Yes, I know I'm suppose to be using invisible zippers applications, but there were so many elements of the dress that I wanted to concentrate on more, that I went with my old reliable zipper insertion method. The only thing I did do differently was that I interfaced the back seams with 5/8" of a fusible knit interfacing to give that seam some stability. The fabric is very drapey and I didn't want a wavy zipper. 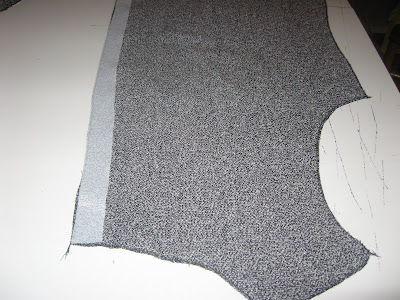 The binding was added after that pleats were made. Nothing fancy...just fold over, press the binding edges together and then sew it onto the pleat front. I sewed it as close to the edge of the binding as possible while catching both the back and front of the binding. As I mentioned in an earlier post, I was so concerned about making sure that the binding went around the neckline correctly that I forgot to include a lining in the dress. Now that it's gotten a little colder (heck who am I kidding ALOT colder) I probably could use that polyester charmeuse lining I was going to add to the dress to give it a little more heft and warmth! But what's done is done and I will wear it with a full slip...yeap, I must be one of the few women left in America in possession of a full slip! *LOL*
The buttons were made from 5/8" covered button shells. The satin bias binding was folded open and pressed flat to use as the fabric cover. This choice was made so that the binding and the buttons were from the exact same fabric. The buttons were stitched through all of the layers of the pleat to keep the pleat laying flat. Just like the designer original, the pleat falls open from the last button to the bottom of the dress. 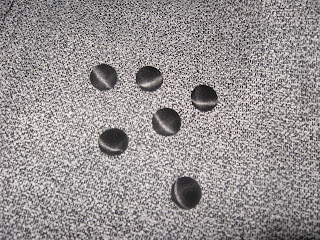 The dress has a 1.5" hem. Black rayon seam tape was added to the hem and then the bias binding was sewn on the bottom of the hem. The top of the hem was handstitched down. I originally debated about having just the hem with the bias binding but in an effort to make this "the dress that I just wouldn't finish" I added the extra step...though I'm actually glad now that I did!
Since I found no detailed views of the back of the dress, I used the version of my TNT dress pattern...so there is a small slit opening...again since this is an interpretation I felt free to free-style all I wanted. 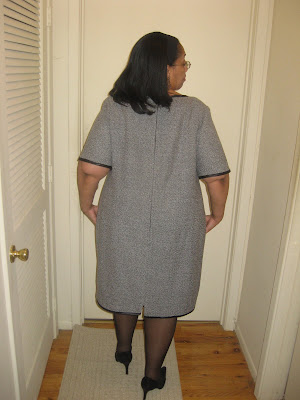 The tie, the tie, the tie *sigh* I gave it up! There was no way to add it to the dress...by sewing it down or by using it as an actual tie that didn't either make me look like a stuffed potato or like I was wearing a maternity dress. That is so not the reason for copying designer gear, therefore, the tie had to go! Which means that I made another version of a straight dress...and I did so because this type of dress works well on my figure. It gives me a very professional corporate look without showing any lumps, bumps or wrinkles that my body naturally has...and it gives a slimming effect...long, tall and straight which I also like...
So this is dress no. 15 for the year...I just realized that I've made a dress for every month plus a few extra...not bad! I have some separates to work on for the Thanksgiving Break and then I will move onto pantsuits...just have to find some jacket patterns I like!!!
BTW, thanks to everyone who offered cold weather wearing solutions for dresses...but tights are out...not warm enough in below 20 degree weather when I'm standing at the bus stop at 6:30 am and the wind is blowing up my coat. I don't do boots because my calves measure 21" around (yes, Marji I'm telling the true measurement!) so besides finding fashionable ones with a wide enough shaft, they also make my legs feel like they are encased in cement...and the final suggestion of wearing pants underneath my dress and changing just boggles me! Why would I wear pants beneath a dress when I could make a wonderful pantsuit and not have to change when I get to work? Oh and I do own two very long winter coats for those cold windy mornings... 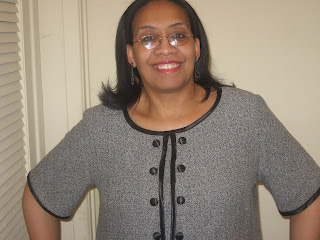 Have a great week everyone...more later!

Posted by Carolyn (Diary of a Sewing Fanatic) at 10:53 PM