I know we get inspiration for sewing in many different ways. So I have spent the last two days wondering what I am going to sew during my personal mini-sewing vacation next weekend ~ four full sewing days!!! While I was working on my daughter's prom dress, I was really considering making this outfit: 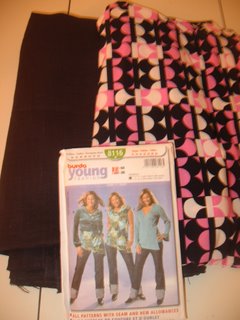 Black linen pants from my TNT pants pattern with a wrap top from the black/pink/white graphic print using the Burda pattern in the picture. But since I have finished the dress, those pieces haven't been calling very loudly. I think they just wanted to be made then because I was preoccupied with the prom dress!

So I was still casting around for my next project. Well, while we were out looking for the stick-on bra cups for my daughter to wear under her prom dress, I happened upon this purse in Burlington Coat Factory: 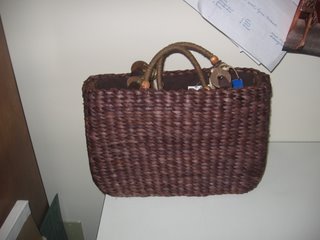 I don't know how many people have a Burlington's near them but they are a store that carries inexpensive name brand items that don't make it to the more upscale stores. You can get Tahari suits, Jones NY Separates, and some other designer gear here. They also carry shoes, children's clothing, linens, menswear, etc. I don't think you can see it in the picture but the handles have these funky conch shells on it for a really summery beachwear look. As I was putting the purse away ~ it was still in the plastic bag laying near the couch in the living room where it had lain since Friday evening ~ I thought it would be kewl to wear the purse. But with what?!

Now, I am sure that I have something in my vast wardrobe that would go with this purse but my mind immediately went to the brown midweight linen that is winging itself to me right now from Fashions Fabric Club. As an aside, we are not going to have a discussion about the fact that I said I wasn't buying any more fabric. This was a staples purchase. You know a basic fabric that you need in your collection to make basic pieces you wear all the time. I just don't know how those other four or five pieces were included in the order, but I digress! *smile*

Well the purse and the new fabric have inspired me and moved me into a new direction. So I am off to find patterns and other fabrics that I already own, which is a good thing, to come up with a sewing plan for the weekend! I will report back as soon as I have a plan!!!

Posted by Carolyn (Diary of a Sewing Fanatic) at 1:02 PM