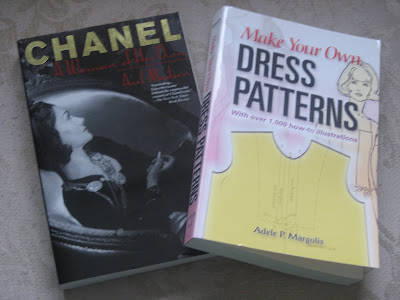 One of my Christmas presents was an Amazon gift card. Now I knew that I wanted books but I wanted to take my time to insure that I bought the perfect books for me! If you've been reading along, you know that I have a pretty good sewing library, consisting of both older sewing volumes as well as newer sewing issues. I have shared my list of "Ten Favorite Sewing Books" and some additional authors whose books I MUST have!

So it should come as no surprise that one of the first books on my list was, "Make Your Own Dress Patterns" by Adele P. Margolis. I was turned onto Adele by Colleen Jones. She gave me my first one, "Fashion Sewing for Everyone" and I just loved that book. I subsequently added the following titles to my library:

The book that I purchased from Amazon, is published by Dover Publications. There is a note on the second page that says this is an unabridged republication of Make Your Own Patterns: A Primer in Patternmaking for Those Who Like to Sew, originally published by Doubleday & Company, Inc. Garden City, New York in 1985. So this is not an original but I am happy to get my hands on it anyway!

Due to an extraordinarily busy week, I haven't done much but skim the book. However, here is the introduction:

"For many sewers, creativity is often blocked by dependence on ready-made patterns. One has visualized something that cannot be found for all the looking in pattern books. There's such a time lag between the moment an exciting style triggers the imagination and that faraway day when a pattern for it is commercially available --if it ever is. Some sewers give up and settle for what they can get. Many begin apprehensively to take liberties with existing patterns. Timidly, they attempt to combine one pattern with another but are too fearful to make much progress. How they wish they knew more about patterns!

If you are one who has been scared to death to move a dart (you think it is put there by an act of Congress) or one who is awed by the seeming complexity of a pattern (the professionals in the field like to keep you that way) or one who doubts his or her ability to create ("I'm really not an artist") --relax! The basic principles of patternmaking are neither too mysterious, too numerous, nor too difficult for the home sewer. Anyone who can work through the labyrinthian directions for sewing that accompany the commercial pattern can surely learn the comparatively simple and clear rules for patternmaking. What's more, the rules work alike for skirts, pants, jackets, and coats and for men's, women's, and children's clothing. For the I-can't-draw-a-straight-line-myself crowd, there are plenty of helpful drafting tools.

Even for the sewer who prefers the timesaving use of commercial patterns to developing one's own, a knowledge of patternmaking is essential. Without it, one is slave to the bought pattern; with it, free to make such changes as one desires. Most important of all, understanding what you are working with will give an independence in design, construction, and yes even in fitting.

It is my hope that the simple nontechnical instructions for patternmaking contained in this book will open the door to a new world in which sewers may find creative excitement in executing their own designs."

There is just nothing else to say after that, except pick one up at Amazon.com or your neighborhood bookstore. It is presently selling on Amazon for $13.57 plus shipping. Here is a link to all of her books that Amazon is now featuring...Adele Margolis books on Amazon. Buy one, buy a few, you won't be disappointed!

The next book I received is "Chanel A Woman of Her Own" by Axel Madison. I bought this one because I just read The Collection by Gioia Diliberto. I wanted to read a biography about Chanel instead of a fictionalized account. This was one of the suggested readings in the bibliography for The Collection. Again, I've only skimmed the book, mostly looking at the pictures. I never realized that Coco was a very pretty woman. I am use to seeing her in the pictures taken during the 1950s and 1960s. There are quite a few of her as a very young woman and I can now see how she attracted so many men! *LOL*

So that's what's new on my bookshelves...I hope you will be inspired to pick up some of the Adele Margolis books for yourself and any biography of a fashion designer is always a good addition to your library, IMHO.

As for sewing, I haven't done any and I'm really tired today. It was a loooooooong work week. Later on, if I feel like it, I may do some more hand work on the "Menswear Lace" dress and I would like to finish it up this weekend. Otherwise, I am just winging it!

Enjoy your sewing journeys today and every day!

Posted by Carolyn (Diary of a Sewing Fanatic) at 9:47 AM