I guess you can tell by the title that I decided to finish up one of my leftover garments from 2007. These are not my original sewing vacay plans. Originally I was going to immerse myself in two really epic projects but since I haven't sewn in three weeks, I realized that I wanted to accomplish some quick things to have new pieces to wear to work next week.

Since I still have a three day weekend later this month, I think the first planned epic project can be accomplished during that weekend. So as of now this is how my vacay sewing is flowing...
The Simplicity 3631 Dress: 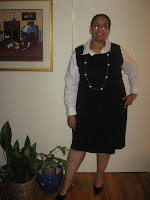 I love the versatility of this jumper/dress in the Simplicity 3631 pattern. The tan tropical wool version made previously works well in my work wardrobe so I have plans to make it in other colors and fabrications. The second version of this jumper/dress is made from black wool crepe.
Last night I reluctantly tried on the dress shell thinking that I still had some alterations to make to it before I could add the lining. However, I was pleasantly surprised when I put the dress on. It seems that somewhere in there I did the necessary changes and the dress fits so it's ready for the next steps. Taking all of that into account, I went ahead and finished it up. 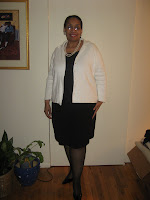 This black wool crepe version will be a hard working piece in my wardrobe that will coordinate with quite a few of the jackets I've recently made. The major difference between this piece, I mean besides color and fabrication, is that I embellished the lowered waistline seam with a black patent leather piping. I don't want each version of this dress to be exactly the same - just in a different color - so each future adaptation will probably have something "creative" done to it to distinguish it from the original.
Here's this one's stats:
Fabric:
100% black wool crepe from Fabric Mart
Lining:
Black ambience
Notions:
22" zipper, black patent leather piping, rayon hem tape.
Next up - the TNT black wool crepe pants that have been cut out and patiently waiting their turn to be constructed. More pictures can be found in my Flickr album.
Posted by Carolyn (Diary of a Sewing Fanatic) at 3:38 PM