Here is another version of my TNT dress pattern that I'm calling, "The Whitney Dress". 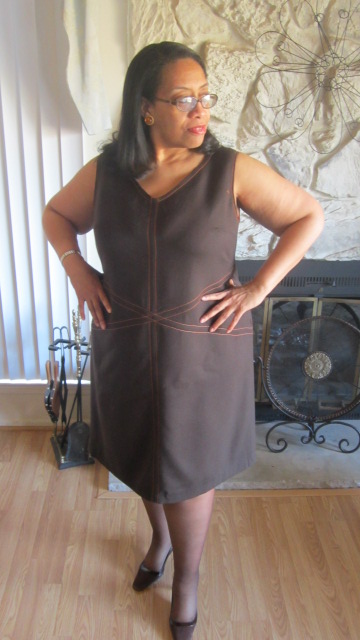 My initial post detailed the pattern alterations I made to my TNT dress pattern. Here are a few more details:


Fabric Prep:
Since I used a wool crepe for this dress, I used Pam Erny's method of using a wet (not slopping wet) white towel in the dryer with the fabric for 40 minutes.  Then I steamed the heck out of the fabric before taking it to my cutting table.

Topstitching
One of the predominant features of this dress is the topstitching.  It would have been attractive with tone-on-tone topstitching but I wanted something a little more intriguing so I went with a contrasting color, orange.  After making a sample, I really liked the way the brown and orange worked together especially since I have an orange cardi to wear over this sleeveless dress.


Back on October 1, 2009, I wrote a blog post on topstitching tips which has some great comments at the end of the post.  This is the way that I topstitch garments but I wanted to add a couple of additional points:

Seaming Details
After the topstitching I think the other star of this dress is the seaming detailing. Now there are many ways that you can add seaming to a dress pattern but I have to admit that the seaming in this dress is influenced by the Burda color blocked dress 117A in the February 2012 issue.


There is more seaming on the front of the dress than the back...and the back will probably be hidden by the cardigan but that's okay with me.  I wanted some detail in the back and even debated putting a double line of stitching down the back but scuttled that idea...deciding that simpler was best.


Other Details
This dress has a v-neckline.  Not something I typically do in the winter but its been such a mild one this year that I went with something atypical for me.  If it gets really cold in future winters, I won't wear a dress anyway, so the more open neckline doesn't faze me, however, it does add to the uniqueness of the dress. 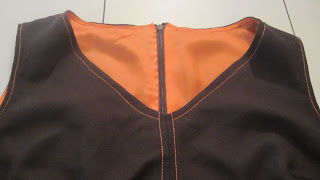 I shortened the zipper because I didn't want the zipper to go through the seaming detail on the back.  I measured how long I needed the zipper to be and then added a thread stop.  After making the thread stop, I cut the zipper off about an inch from it.  This is how I handle shortening a zipper after watching one of the sales clerks at Steinlauf Stoeller cut a zipper and having him tell me that you could use a thread stop to do the same thing he was doing. 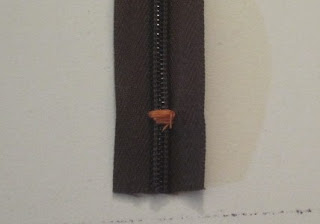 The dress is lined but I decided to be as bold with the lining as I was with the topstitching so I used some orange bemberg lining I had in the collection... even though only I will know that it's there...well and all of you too, *LOL*...I thought it just complimented the dress. 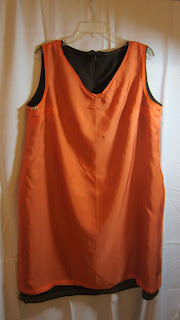 I didn't add lace to the lining hem.  I didn't have any orange lace and even if I had stashed some I probably wouldn't have used it.  A simple machine stitched hem seems to go better with the spirit of the dress.


Other than those points, it was a regular sew.  A well-thought out and much pondered sew but a regular sew...so a few more pics! 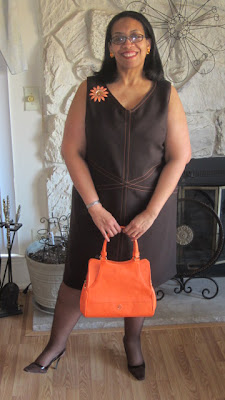 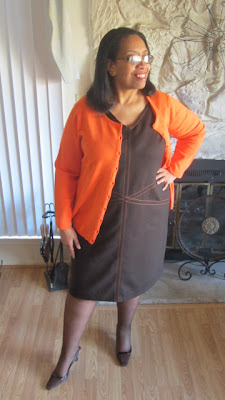 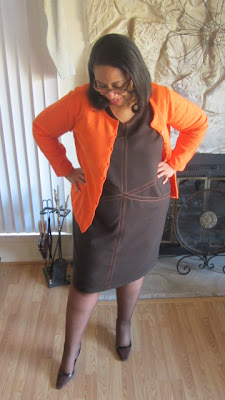 Showing the seaming & how
it works with the cardigan 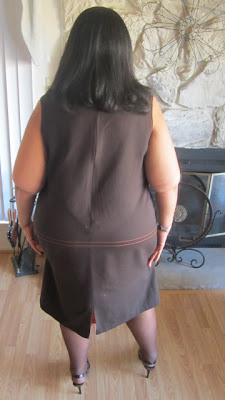 Back view with seaming
on dress back


The soundtrack of the weekend and last week has been tunes from Whitney Houston...I find that I'm gravitating to quite a few of the songs from her last album, "I Look to You" even though she doesn't have the range of her earlier songs, these seem especially poignant due to her untimely death...