First let me remind you of the inspiration dress ~ a Calvin Klein dress that I saw on MyHabit dot com: 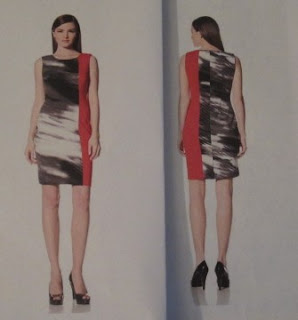 The most challenging part of making this dress was insuring that the red piece was on the same side of my body in the front and the back.  Honestly, I kept getting this mixed up in my mind.  I resorted to basting the pieces together to make it work. 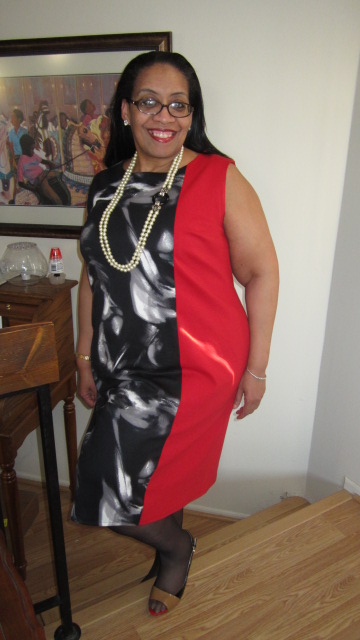 Construction:
As I stated before, making sure that the red was the same on the back and front was the most important element to me.  So after all of the pattern pieces were made from my TNT dress pattern, I laid them singly upon both pieces of fabric to insure that I achieved the look of the inspiration dress.

When I basted the dress together, I realized that I'd been unsuccessful in getting the red on the right sides.  So I unpicked and recut the back pieces. This resulted in a totally seamed back.  From what I can tell on my inspiration pic, only the side with the red piece is seamed but that's not how my version ended up. 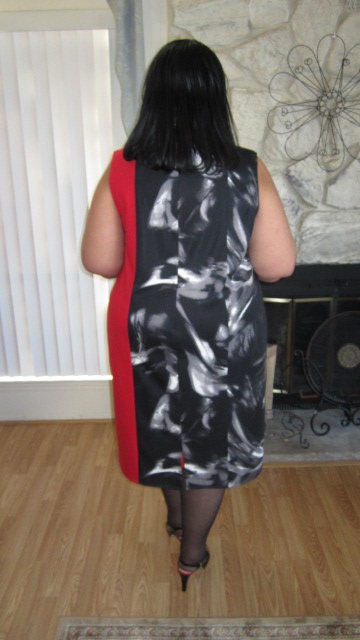 It really was an easy make after fixing that issue especially since I was using my TNT dress pattern.  Then I dithered over whether or not to add a lining. I finally decided to add it because even though I could wear a slip with the dress, a lining is just better for ease of wearing and longevity.

A question or two has been asked about what type of lining I add to my ponte dresses and I use rayon bemberg linings in them.  Even though ponte is called a knit, to me it behaves like a woven, so I always use a rayon lining and I've had no problems with the combo. 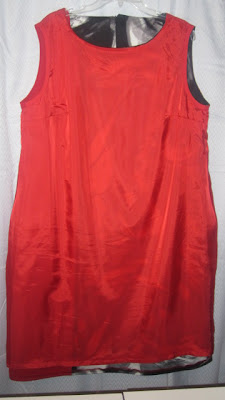 A few things ~
Like I said previously, I found the original dress on MyHabit dot com. I visit this site everyday because of the daily email I receive from them. They have quite an interesting selection of discounted designer garments from which I get a lot of inspiration.

This dress originally cost $139 so it was probably from one of Calvin Klein's discounted lines.  MyHabit was selling it for $69.  My dress cost me $50 and most of that was for the black & white print knit.

However, since MyHabit offers a limited size range, probably because it's the last of these pieces, of course my size wasn't available.  Who knows if the size was ever offered, because I didn't go looking for other views online.

If you want to make your own version of this dress, I would suggest Vogue 8886. 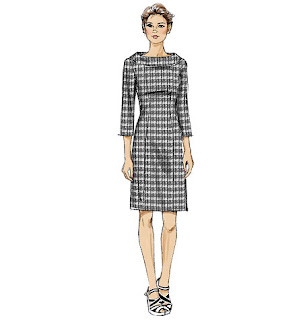 Even though this dress has a wide neckline, it does already has the piecing in the front and the back that would allow you to get the print blocking/solid color combo that drew me to the designer dress.

Another great thing about this dress is that I didn't need to make a topper for it. I have several cardigans that will work with it, so it was a perfect sew.

Regarding the fabric, I haven't given up on sewing with ponte knits even though I've recently retired several dresses made from it.  See I don't expect everything I make to last forever.  If it did, I would have no need to sew as much as I do. Those dresses survived about three years and I wore them during a period at my job where I was very physical...moving & boxing up things, crawling under desks for telephones, etc...things I no longer do.  I'm sure some of that abuse aided their demise! 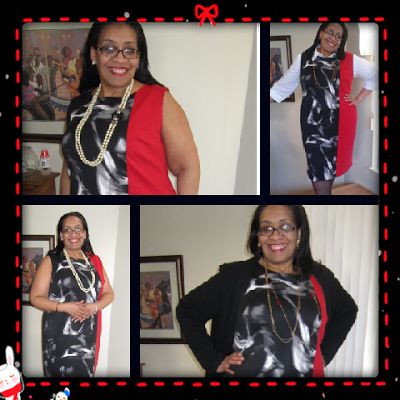 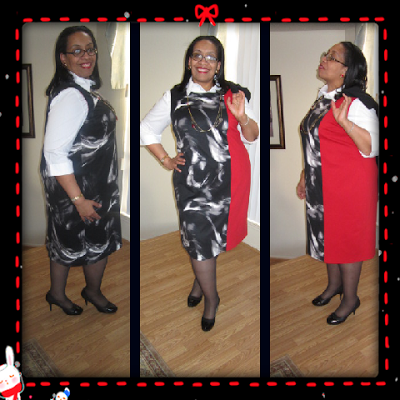 Worn with a white blouse for a more casual look 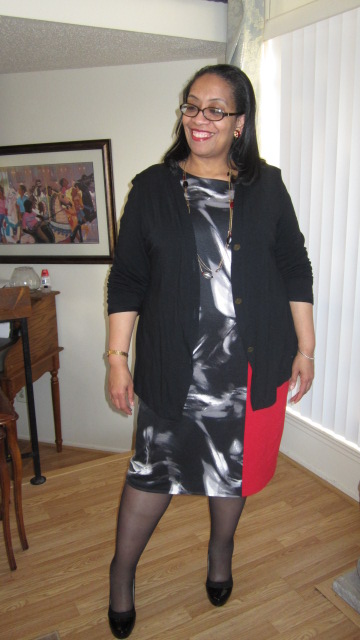 Worn with a black ponte cardigan made years ago 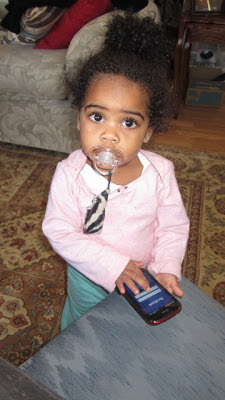 Posted by Carolyn (Diary of a Sewing Fanatic) at 8:09 PM